The Open Days event has a long and proud tradition in the worldwide Microsoft MVP community and, this year, Microsoft tried something different by having a Western Europe MVP Open Day event (Italy, Portugal, Spain) + Benelux and Scandinavian countries, organized in Rome (Italy) on April 29th. 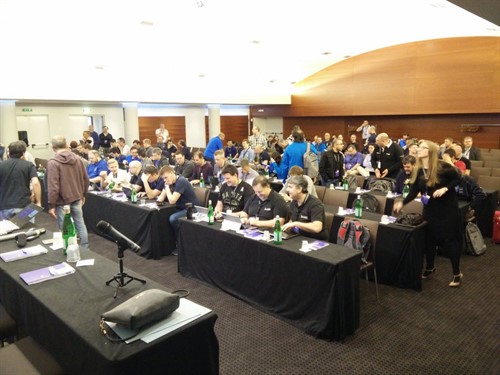 Every year, some of us MVPs, present sessions to the others and, this year, together with Beppe Platania, I had the opportunity to present our latest work with Virtual Reality technologies: ImmotionAR ImmotionRoom.

ImmotionAR is a division of Beps Engineering, focused on creating virtual/augmented reality emotional contents and technologies. Our mission is to enable the creation of immersive experiences that are able to give users awesome sensations, leaving them amazed and excited.

ImmotionRoom is a system that leverages the latest tracking sensors (like Microsoft Kinect) and computer vision technologies to immerse the user completely in the virtual world, with its full avatar. At the same time, it tries to detect all the actions and gestures and make the virtual world react to them. So, for example, if you want to walk forward in your favourite game, the only thing you have do is to physically walk in place or around the room! Exciting, isn't it? The sense of immersion increases exponentially, and the motion/cyber sickness is reduced a lot. And you can use it with friends, so the virtual reality does not isolate you from the rest of the world anymore!

In the Open Day session, we presented a short introduction to Virtual Reality and related technologies (Oculus Rift, Samsung Gear VR, Google Cardboard, HTC Vive, Razer OSVR, etc.). We also presented which are the most important problems and challenges inside the VR world, natural interactions and locomotion above all. At the end of the session we have given to other MVPs the opportunity to test the solution using the Samsung Gear VR and live the emotion to move inside a Virtual world without any wired connection and without dressing or handling any kind of sensor or controller. All the feedbacks have been positive. 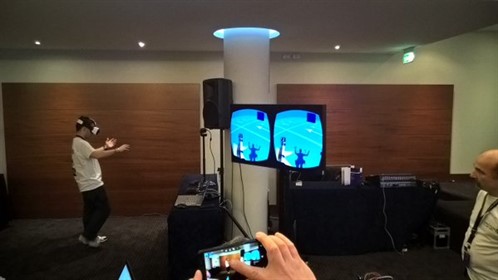 We have to thank Cristina Gonzales Herrero (our MVP Community Leader) and all the other MVPs that voted for our session, and for giving us very useful and interesting feedbacks on our work.

We will present a similar seminar next week at the Microsoft Embedded Conference 2016 in Naples (Italy), stay tuned to know more.