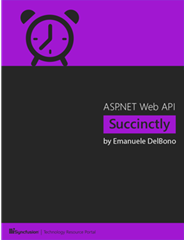 Probably, the most of you know Syncfusion for their great and FREE MetroStudio, an icon repository tool with over 2500 icons for Windows Phone/Windows Store apps. But Syncfusion FREE offer doesn't stop here: they provide a number of interesting white papers and one of the biggest and growing collection of technical e-books, the " Succinctly" series, covering mainly Microsoft technologies, but not only them. Just a few days ago a new e-book has been published: " ASP.NET Web API Succinctly", written by the compatriot Web Architect Emanuele DelBono.

This book is an overview of Microsoft ASP.NET Web API technology, a new web framework based on ASP.NET MVC, introduced by Microsoft to easily build powerful HTTP-based services, which are becoming more and more a requirement for companies. A few weeks ago, the framework has been refreshed with the release of Microsoft ASP.NET Web API 2, but the core concepts are still the same, so if you would like to start from the basis and learn how to build your powerful Web APIs, the book is a great starting point. In the perfect "Succinctly" aim, the book is a concise technical book that introduces most of the required topics in less than 100 pages.

In conclusion, the book is really a great introduction to Web API development and its internals. It's not a reference book with hundreds of pages (as it was not meant to be that). It's the best free e-book for Web API development beginners and a great read for people who are already developing REST API with other technologies. It's full of great, commented code examples that can really help you take the right design and architecture for you next API project from the beginning. What are you waiting for? Go to the Syncfusion website and download it!