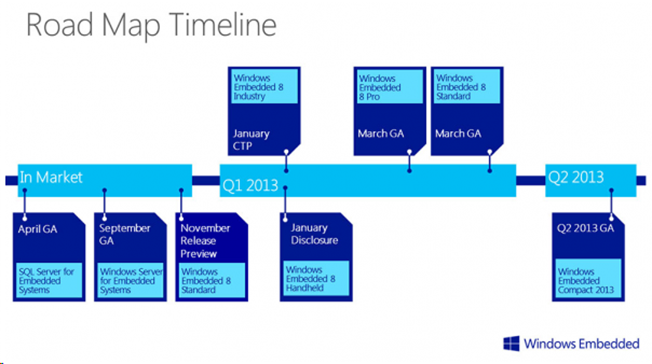 Some days ago Microsoft shared with the world a detailed roadmap about its upcoming Windows Embedded products.

The other Windows Embedded products:

Standard**, which is based on the Windows 8 core code. A release preview is available now; general availability is planned for March 2013.

Pro**, which also is based on the Windows 8 core. This is the new name for the product formerly known as Windows Embedded 8 Enterprise. General availability is scheduled for March 2013.

Industry** is the renamed Windows Embedded POSReady (with POS standing for "point of sale"). There will be both a community technology preview test build and details on timing coming at the beginning of 2013.

2013** is the new name for the product that until now seemed destined to be known as Windows Embedded 8 Compact. Microsoft is acknowledging publicly that it will be generally available in the second quarter of 2013.

Automotive**. Microsoft is working with "preselected partners" on this product, which will be based on Windows 8 technologies.

For other details and official press release, visit the Microsoft News site.